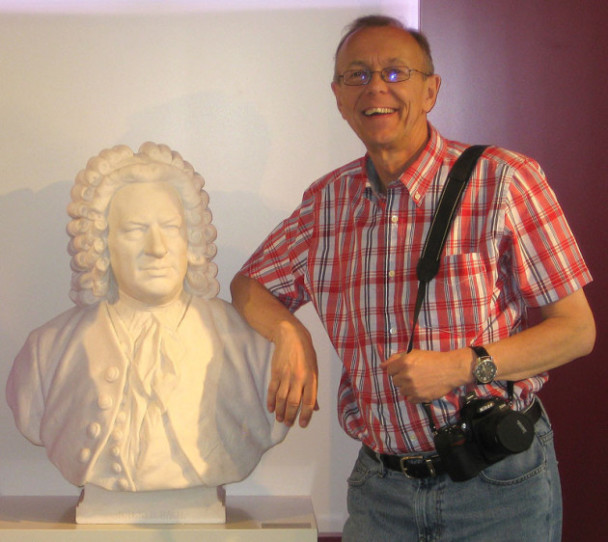 That's me. The one with the camera. My name is – like the composer Johann Sebastian's name, too – Bach. My hobby: Taking photos. Plus I am a hobby genealogist. Plus I love to write ... and best I love writing much. Well, my first name is Peter. And my "complete" name is Peter Bach, Jr. The Jr. is, so you can differ me from my Dad. Because his first name is Peter, too. What fun we had for decades when we worked together and lived in the same community. And if you are interested, what hobby my dad has, then click here and find it out.

Actually ... you wanted to get to the shop? Now!? That's possible here with a click on the button.

When I was little, my dad took me with him on some business trips. On his photo trips. To Bavaria and to South Tyrol. There he took photos: Edelweiss, groundhogs, mountains, and humans plus the ancient customs of the folks. Having these photos developed, he thought about text and he recorded that text. That was, long before cassettes tapes showed up. Cassettes were cool before they knew CDs.

He mixed his text with the music, which bands played where he took his photos ... in Bavaria and in South Tyrol. He mixed that music under his narrated text. After that he presented slide presentations – it was not common to mix narrated text and slides back then – in newspaper publishing companies and in adult education centers. He was – back then – the first, who did such a presentation and he created a job when the Germans – after World War II – started to travel to learn more about the neighborhood countries. That is why my profession is photographer. After I made my diploma I accompanied my dad. 10 years later, we both – my Dad and I – offered something similar to companies. We explained how companies worked, how they brew beer, what happens in a mine, how a newspaper is produced. Things, which are complicated was what we wanted to present to a public, so they understood that easily. Perfect for children, too and for grownups at the same time. Finally, I make that for 35 years and I still create these presentations today. All over Germany. Sure, with nowadays technology. That ... is actually my profession. 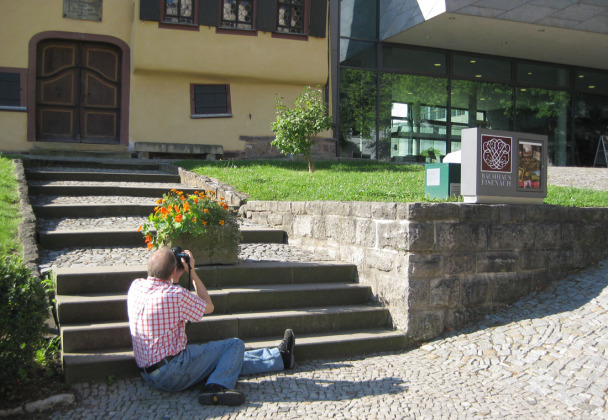 Taking photos: I am just loving it.

I am self-employed. That is nice when you don't have to get up in the morning and it's not that nice when you have to care about, who needs such a presentation next year. However, I don't work alone ... my wife Renate accomplishes everything that she can manage better than I. In my profession. And that is pretty much and it starts, that she loves to work with a PC. I am just writing with such a machine. With the computer. If it gets tough, then Renate helps me.

However ... I am – today in the Bach Biography Project – just one of us creative folks. I am the one, who has steadily new ideas in my head. And I am the one, who doesn't just like to write, but especially I love to write exceptionally much. Plus I love to take photos. I mentioned that earlier already. But ... I always take photos only, when the weather is nice. And I take many photos, too. Finally, I love to "handcraft" websites. That is why I created so many of them. Around 20 in the subject of Johann Sebastian Bach alone. Just one is for children.

How Did It Start, with Bach and Me ?

In the years 2010 and 2011, I began being interested in the composer Johann Sebastian Bach. That is to say, firstly I was interested just in the genealogy of the Bachs. I was interested in the subject of genealogy for a long time already. First I wanted to find out, who the parents of Johann Sebastian were, who the grandparents of those were and beyond that who their parents were. Why? Because I wanted to research, whether I am related to the master.

Shortly after that, I wanted to hear for the first time as well, how the music of Johann Sebastian Bach sounds. However ... it didn't work ... and I realized much, much later, what the problem was.

The whole following story in just one sentence? Because I thought, it might be the same for other folks and in particular for children, that is to say, it's complicated to get more and correct information about the composer Johann Sebastian Bach, which at the same time is presented entertaining, I invented my website "Bach on Bach". Later I realized that this website is perfect for grownups, but it's not perfect for children. To realize this fact, I needed two years after all. Well, okay, that have been three sentences, instead of just one.

Well, I can tell you, that this was brain exercise and it was difficult to decide, who is next in line. After introducing myself, the writer, who I am. Finally, I decided on my big sister who I introduce now, for two reasons. First, she is on the book cover together with the author. And next: I know my sister longer than I know my wife, Renate.

Petra-Ines Kaune is painting already for a long time and the illustrations regarding Johann Sebastian Bach are already her second work for a children's book. She painted her first artworks to illustrate a little story for her nieces and nephews. Back then I regretted, that only a small, actually tiny number of humans would see these cool paintings. As the edition back then was ... just one copy.

Until today, Petra-Ines Kaune painted hundreds of pictures, has organized exhibitions and sold many paintings as well. Right here I want to thank her again and I want to send her my cordial thanks via the internet ... for all the artwork plus for her encouragement. 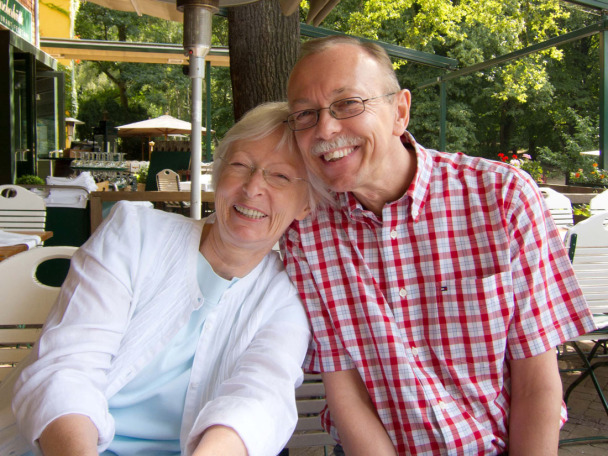 On the left, it's Petra-Ines Kaune, who thought about and painted the cute illustration in our children's book. The gentleman on the right, you know him from earlier on this page. Petra-Ines and my wife (... she is next in line) said as one, I could accomplish such an adventure ... namely writing a children's biography about Johann Sebastian Bach. So, they convinced me finally.

Last, but not Least: My Wife Renate

Renate married me 37 years ago. And a few years later, she began, to work together with me and my father. We three worked – for way over 20 years – in a real, exciting, little family business. Today we are just the two of us: Renate and I. Until age 83 my dad still worked with us. Today he's almost 94 and he is still active with his hobby. However, he is not working anymore. Because electronic became more and more challenging for him when he was in his 80s. 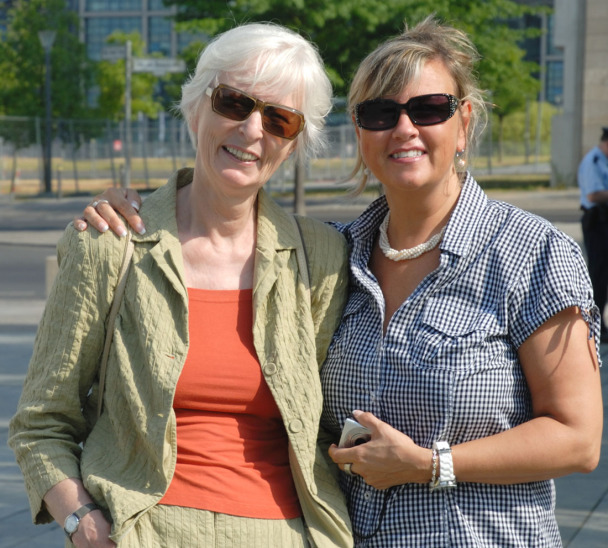 You know the lady on the left in the picture, namely Petra-Ines Kaune, from earlier on that page. The second lady, on the other side, is my wife Renate. I am married to her for over 35 years and we are together for 40 years meanwhile. Those who think, that's a really long time, I would like to tell: Plus we are together 24/7 ... leisure time and on the job. 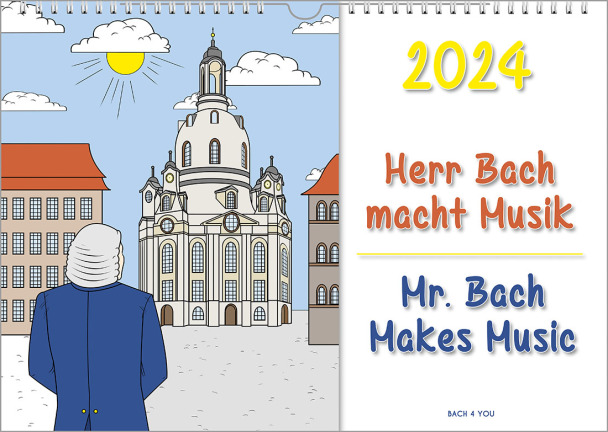 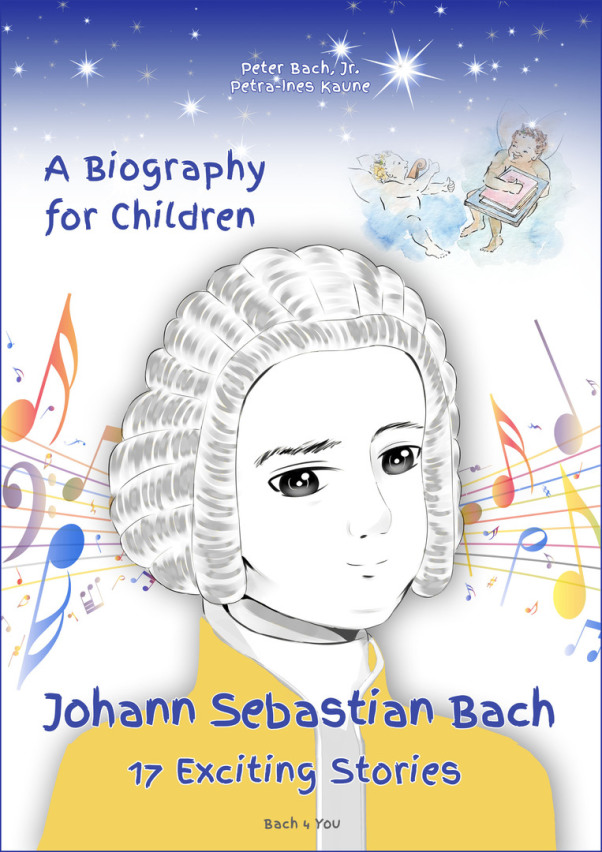 A page about the creative folks behind the Bach biography for children, and there is not a single picture of this biography: That is just not possible. Here it is and you may order one copy in the shop of the publishing house. 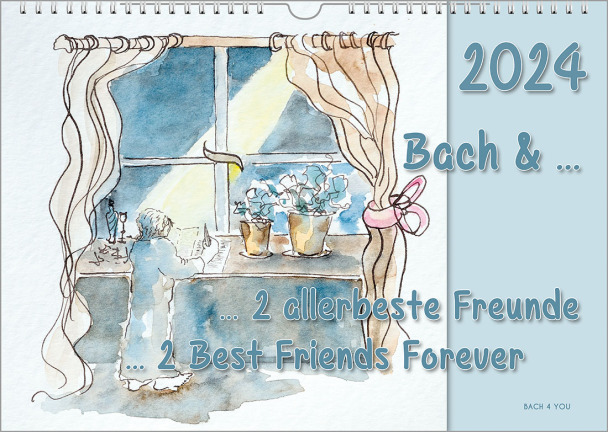