Why is there a Luther calendar, or more precisely, a Dr. Martin Luther calendar on a portal about Johann Sebastian Bach? It is not quite easy to answer. But: First of all, Luther was also a composer. Did he compose classical music? In some way, yes, if you define it as generously as we do. To be precise, what Martin Luther composed is "early music". Songs. He composed over 30. Reason enough for us to allow a calendar in his honor. But how did we come up with this idea? The original thought was probably that while searching for age-old wood engravings on the themes of Bach, Mozart and Beethoven over ten years, we "passed" Luther etchings, Luther steel engravings and Luther wood engravings every now and then. In the past ten years. Then there was a break.

You do not want to be entertained now? You want to get to the store? To order a Luther calendar? Or several as gifts during the Christmas season? Gladly. Then click here to visit the store and that is directly to the page where you can order this calendar. 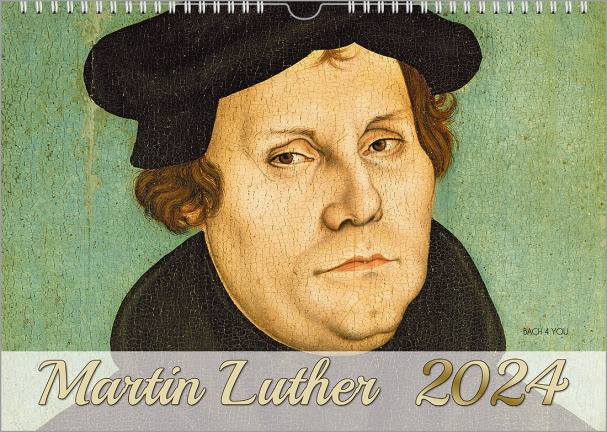 The Luther Calendar. It was created around twelve years after our Bach Mission began. And for a long time we didn't know at all whether we would find twelve motifs for twelve calendar pages, with a quality that would fit perfectly with our publishing house philosophy.

In 2017 the world celebrated. 500 years of the Reformation. And right at the forefront, people around the world also celebrated Martin Luther. In his honor and on the occasion of this anniversary, a toy company released a toy manikin: Luther. It was to become the most demanded toy manikin in history. We had been wishing for such a toy manikin for twelve years. A Bach manikin (... today it is called the "Little Bach Figure" in the shop). In the publishing house and via the website "Bach on Bach" there were even inquiries whether there might be such a Bach manikin someday. And no, we didn't believe in it, because the level of awareness of Bach is tiny compared to that of Luther. And the production would not have been profitable for the company. But things turned out differently: Shortly afterwards, measured against the twelve years without a Bach manikin, one did appear. On Bach's 333rd birthday. What a joy. Naturally, we ordered it, included it in our offer and photographed it for this purpose. 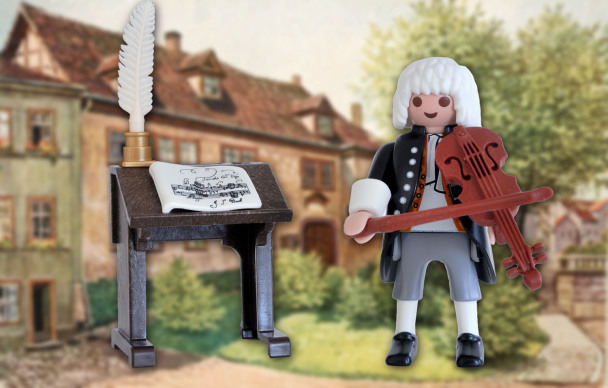 Sure: white wig, writing desk, inkwell, pen and violin. Undoubtedly, it is the Bach manikin of the mighty toy manufacturer. By the way: In the background blurred is the Bchhaus in Eisenach.

Also, the concerns about whether we would be able to find enough motifs for a twelve-page calendar "evaporated". Of course, cool, modern and hip paintings were out of the question for this theme. After all, we already find the Luther manikin extremely borderline. But thousands of Christians did not see it that way.

Good. So no hip, quirky and funny motifs on the subject of Martin Luther. What remains? Monuments, for example. In fact, there are many, many more monuments of Luther than of the Baroque composer. And so great photos of Luther monuments offer themselves as calendar monthly pages. Actually ... there are far too many Luther monuments, there are 16 Luther cities alone. And we didn't want to offer a Luther monument calendar, but a mix of different components. Maybe there will be a Luther monument calendar ... later on. In that case, some photo excursions would probably be necessary. Always only with best weather. And always only one or two per day at most. Or per trip. We want to see how the demand for the first Luther calendar develops.

Next topic: wood engravings. Ancient wood engravings. It is not so easy to find the originals for them. So that you can scan them perfectly and in high resolution. And then process them so that they are perfect in print. At first, of course, there are concerns about whether there are enough such artworks at all. So scenes with Luther in focus are enough. And there were. In the end, we bought them all and processed them further.

The third component is portraits of Martin Luther: the very well-known and the most well-known. Here too, of course, the resolution of the original played a very decisive role, because we of course did not want to offer a single second-rate motif in our Luther Calendar. 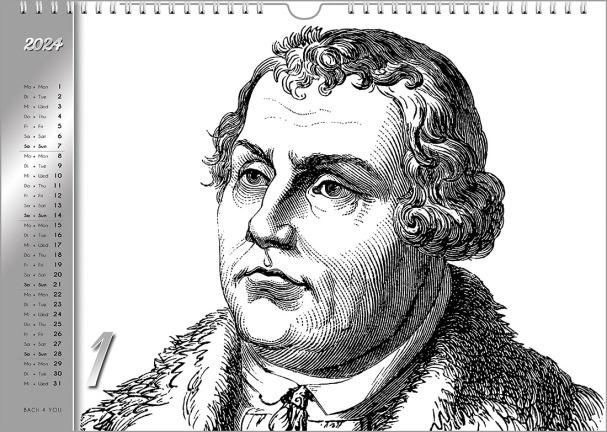 The Luther Calendar in January 2023.

We discarded another component shortly before the editorial deadline, although we had already bought a specimen: Luther on stamps. There are two kinds of such Luther stamps: One is "serious", but hardly any of them are really beautiful. The second kind are gorgeous souvenir sheets and really great single stamps, but they are issued by countries in Arabia or in Africa. So they are almost "Cinderellas", so no real stamps and only printed for the motif collectors among the stamp collectors. Few Luther stamps are kind of in the middle, so neither really beautiful, nor Cinderella. There are also first day covers on the Luther theme, of course. When the ordered stamp mentioned above arrived, we had already discarded the idea of a monthly page with a Luther stamp. This motive would not have fit to the others. But maybe, just maybe, there will be a Luther stamp calendar one day. Let's wait and see how the first Luther calendar is liked. 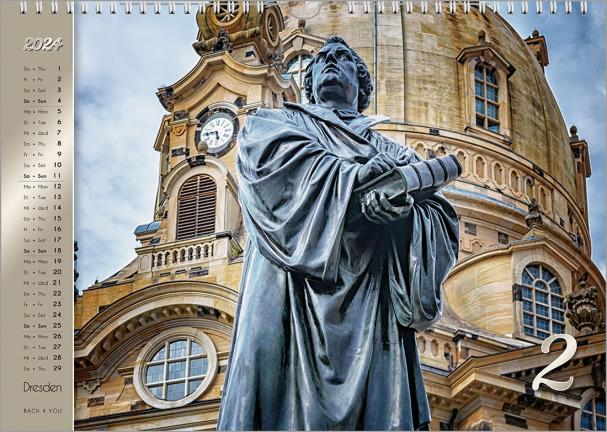 The Luther Calendar 2023 in February: the Luther monument in Dresden, Saxony, Germany. 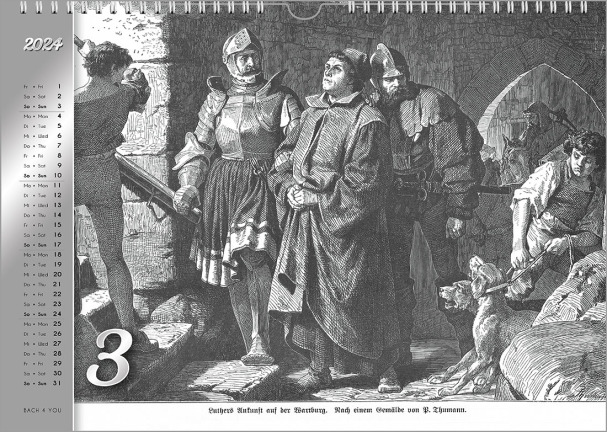 The Luther Calendar 2023 in March: It is the arrival of Martin Luther at the Wartburg near Eisenach in Thuringia, Germany. By the way, all wooden engravings are excellent in print, the images on this website may not be displayed optimally, depending on your PC, laptop, smartphone or tablet. 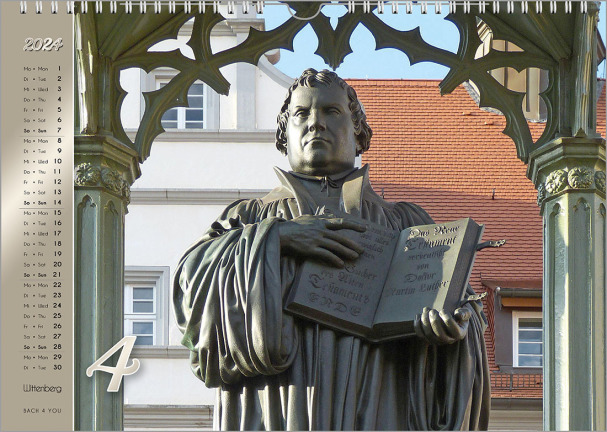 The Martin Luther Calendar 2023 in April: the Luther Monument in Wittenberg. You can hardly tell from this photo that Luther is standing under a canopy. But ... you know that now. 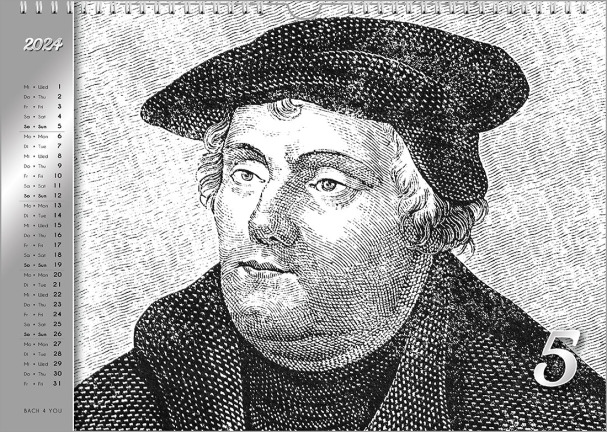 The Luther Calendar 2023 in May. Once again an age-old wood engraving. It is a relatively well-known portrait of the reformer, but this time with a cap and again: printed, the wood engraving looks perfect. 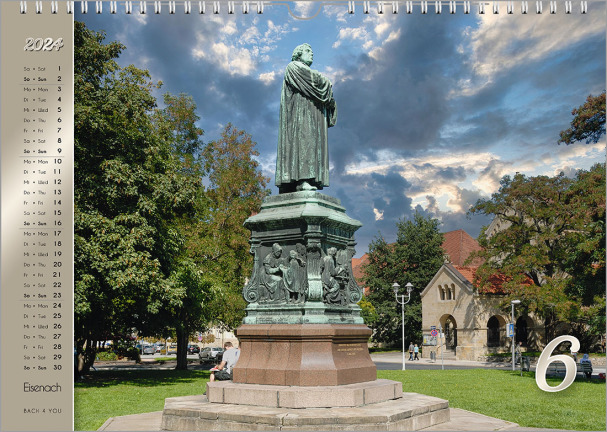 June in the Luther Calendar 2023. It is the Luther Monument in Eisenach. 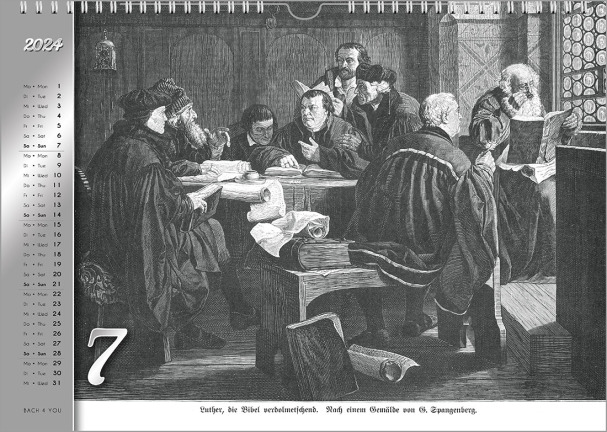 Luther "forinterprets" the Bible. It was called that way in the German language back then and maybe it was different in English, too. It is a scene that took place at Wartburg Castle close to Eisenach, Germany, where Luther hided as Junker Jörg. Here he is said to have thrown his inkwell at the devil. 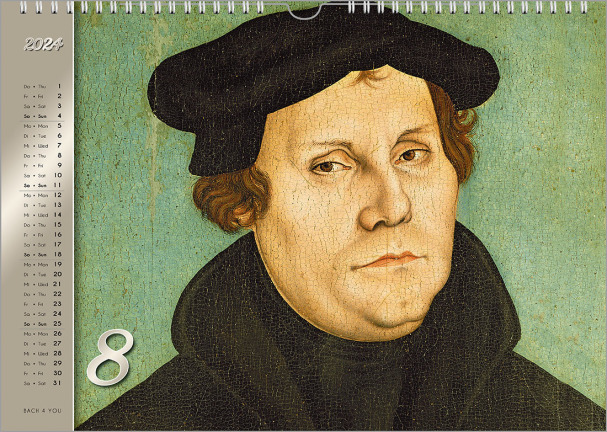 The certainly best known portrait of Dr. Martin Luther. Therefore, it may be on the cover of our Luther calendar and at the same time it is the August page. Perhaps it was painted by Lucas Cranach the Elder. In any case, it comes from his atelier. This calendar is also available in 2023 in three sizes.

Luther's wedding as a wood engraving is our September sheet in the Luther Calendar 2023. On June 13, 1525, the Eisleben native married Katharina von Bora. The Luther City of Wittenberg celebrates the occasion every year. 100 performers, 2,000 wedding guests, 90,000 visitors: People in the town of 45,000 residents are particularly proud of this. 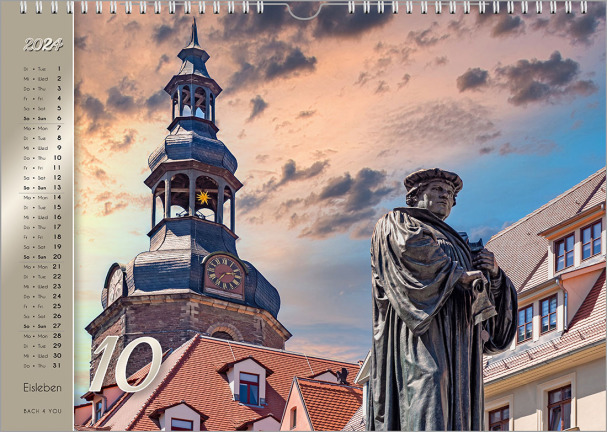 Rarely is a prominent personality born in the same house and then died exactly there over 60 years later. That happened in Eisleben, Germany. It is the fourth photo of a Luther monument in the Luther Calendar 2023 and became the October motif. 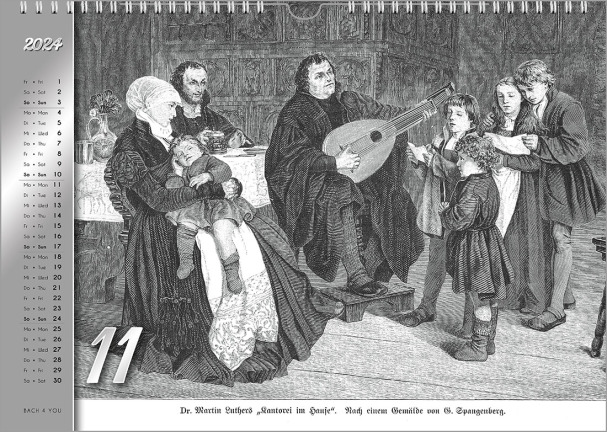 A wood engraving after a well-known oil painting by Gustav Spangenberg: The penultimate month in the Luther Calendar 2023 ... November. 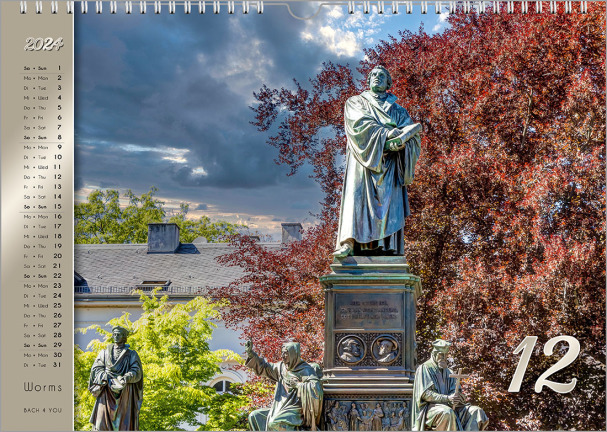 The most voluminous Reformation monument in Europe becomes the Luther Monument in our Luther Calendar 2023. It stands in Worms. Only four of ten figures can be seen, in favor – in our case and in this photo – of Martin Luther, who stands dominantly in the center and also elevated. The final December calendar page.