To start with: I am sure it's one of four reasons, why you have "landed" right here. First: You googled. Actually, it's almost not possible to get here. You might already be interested in the subject of Johann Sebastian Bach. In general, or, because you already talked about this website about Johann Sebastian Bach with classmates and now you are interested in the answer to one particular question. Or thirdly: You – unfortunately ( ? ) – just don't get around the classical composers in school currently. A final fourth option is: You music teacher recommended this website ... so now you are here. Welcome!

Here on this website I actually pictured it like this. By the way, who " I " am is, what you can explore in the biography for children section, there it's the lowest section: "About Us". Or you just click here.

However, meanwhile, the internet is so stuffed with information, that you won't find the best website related to a particular subject isn't easy. Although Google helps with that much.

Many Grown-Up Themes Are Not Additionally Designed Especially for Children, Too

It is getting even more difficult if children and teens are looking for exciting websites in subjects, which actually grown-ups are interested in only.

That is why I believe, you just have to edit the theme a little. Just thinking a little, like children would. And adapt to this. I believe as well, that some themes don't have to be adjusted starting at a particular age. Sure: It's different for children age 10 – for them, it should be just a little bit more exciting, a little cooler and a litter more easy going. You just have to look for the "boring stuff" inside a subject, and after that remove it. So, what's left after that is sometimes even exciting for grownups?

And it's always possible to present it more serious. Those who are interested in more serious stuff - after meeting the cool way and the flaky style of my websites – will find my hints. There you will find where you get ambitious music, which is the most detailed Bach biography of the world best Bach connoisseur and where you find the best reading about the most intense Bach family research.

With my Bach website for children, I transfer my idea and my experience, that you manage such a challenging subject like Johann Sebastian Bach better with a little support – that is to say with this website – and it's much more exciting. However, I now stop ... with my foreword.

From This Point, We Start Johann Sebastian Bach for Children Age 11 Years until 14 Years ... Round About

To the point. Johann Sebastian Bach is the icon of the most famous family of musicians on earth. Plus she is the largest family of musicians for round about 300 years. Many consider him the best musician of all times ever, however, this is, of course, a matter of taste.

Bach was married twice and had 20 children; however half of them died during birth or in the oncoming years. He married a second time because his first wife died at age 35. Four of his sons became very well-known musicians, too, two of them became – in their era – even more, famous than their father. More than 1,100 music works of Johann Sebastian Bach are still preserved. However, they think that he composed more than 10,000 works back then.

No, we get to the promised "guidepost".

Firstly the life of Johann Sebastian Bach. There are several options, to learn about it. Most convenient it's like this: To click on the play button below, open your eyes and ears for 9 quick minutes. After that, you already know a great deal.

The video about the life of composer Johann Sebastian Bach. It's especially cool for children: After nine minutes you already know much about this musician from Eisenach, Thuringia, Germany.

The Music: By Johann Sebastian Bach. The Pictures: Tailor-Made for Children

How ... just how do you find the best music works among 1,128 pieces. To find out, whether you like Bach ... or you just don't. It's actually really easy: You rely on the taste of thousands of people. You have researched on the internet and you found out on Youtube and Google, which are the most popular and the most well-known works of Johann Sebastian Bach.

I found 33, of which I only like one a little less than all the other 32 pieces. That is – initially – a collection, which you don't find elsewhere: Not on the internet, not on a CD and you don't find it on a DVD as well. I like that music works best, which you hear before somehow, or such works, which you can already buzz after you heard them three times or four times. That is how I like classical music best. Because I am not that long excited by classical music yet. Important: These 33 music works are not Bach's best compositions. I never pretended that.

However, with your PC, your laptop or on the way on your smartphone or your tablet you still have nothing to watch. Not like in every nowadays music video. Something "for your eyes is missing". So we thought – my wife and I – it would be nice to put a few pictures together. After that, we arranged a few photo collections, particularly for children. Not many – actually just two – however it's not bad for the beginning. In addition, you can – after watching those – try, whether you might possibly be interested in more themes: nice fall foliage pics and the American nature parks are not exclusively grownup themes.

Here you may watch one of the videos, which we collected for children, directly. And yes, you might be too old for a cute kitten. However, if you like this already, you could personally combine. There are 33 music works of Johann Sebastian Bach and there are 33 photo collections. And that is how many Bach videos?

It's true, this work of Johann Sebastian Bach combined with the collection of "kitten" photos is really just something cute for little children – at least I guess so.

Please purchase all music gifts via our shops on the internet … learn more. 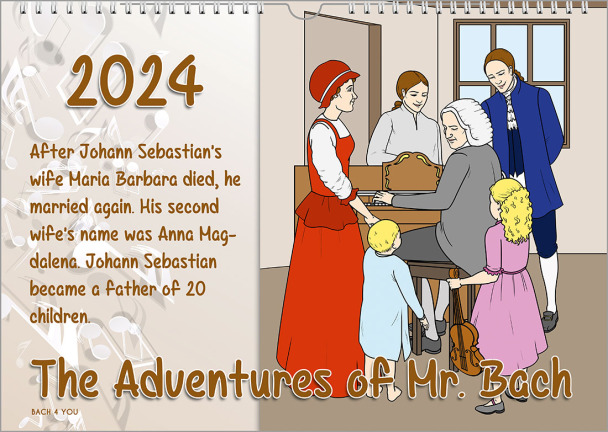 Parents, teachers, grandparents, musicians, music teachers: There is a music calendar, which matches the Bach biography for children. Plus it's working in German and English, the biography – it's a pity – is ready in German only. 33 Bach calendars: Three sizes, US style / EU style, 2023 + 2024. To the shop.